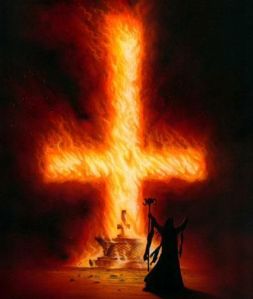 The supine man lay there, eyes wide in terror, mouth agape with an unuttered cry on his lips. He saw movement in his periphery and knew that the demon was approaching. It came into his field of view eyes watching him intently. The strangely swathed face added to the fearful aspect as the man tried to look away. The demon’s underling crouched in the corner pawing at his shoulder watching its master intently.

“In nomine Patris, et Filii, et Spiritus Sancti” the man whispered to himself hoping that the ancient language of Latin held more power than his native tongue.

The demon approached closer; arms raised. The underling held his shoulder more tightly waiting with a sense of urgency for its master to commence the torture.

The man let a gasp erupt from his mouth, still agape. He closed his eyes hoping to avoid the nightmare that was about to be perpetrated on him. Too late he thought as the demon began. A single tear trickled down the man’s face as he sunk into oblivion.

He was deafened by the pounding of blood his head swimming. A fog masking his agony gradually lifted. An urgent voice sounded in his ear but he could not decipher the words. He tried to blink his eyes open but a bright light caused sharp pain to erupt in his head. The voice kept persisting as he slowly floated to the surface of conscious thought. Someone was tugging on his shoulder, forcing him to face whatever madness awaited him now. He finally succumbed and gave the voice his attention.

“Sir, sir, we’ve finished now, you can sit up.” The woman’s voice said.

The man slowly rose as his vision normalized.

I hate dentists he realised. 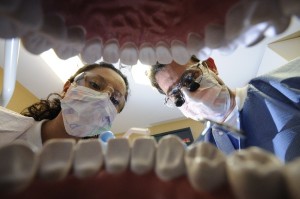 My Most Viewed Posts